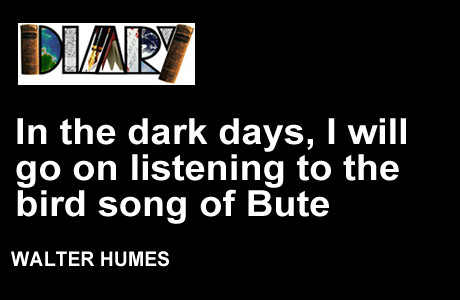 Thursday 23 June
On the morning of the referendum I awoke to the sound of the dawn chorus on the Isle of Bute. It was already bright and sunny and the medley of birdsong put me in good spirits, though I was apprehensive about what the day might bring (with good cause, as it turned out). Unfortunately, I didn’t have time to enjoy another walk on the island as I had to return to the mainland in order to cast my vote. I caught the 10.10 am ferry and by 2pm I was at my local polling station. All was quiet. The staff assured me that they had not had to deal with any rants from overwrought Remain or Leave supporters. I was a little disappointed to hear this as an element of trouble always makes for more interesting reporting.

I occupied myself with routine domestic matters for the rest of the afternoon and early evening, trying not to dwell on worst-case scenarios (e.g. Boris Johnson as prospective prime minister, with a sinister group of right-wing zealots as his backers). At 10pm I settled down with a supply of liquid and savoury refreshments to watch the results. My earlier apprehensions were soon justified as Sunderland returned a large vote in favour of the Leave camp. Forever a glutton for political punishment, I snatched a few hours’ sleep and got up early to discover the full horror of the outcome. The Boris nightmare had emerged as a distinct possibility, particularly after David Cameron had announced his intention to step down.

A little later, I had an uncharacteristically sentimental moment. I thought back to the birds I had heard on the Isle of Bute. They start each day with a cheerful song, even though they face the same challenges every time – finding enough food and avoiding predators. In the dark days that follow, they will serve as my inspiration, with one small difference. Political predators have to be resisted, not just avoided. The restrained and measured tone which is my usual hallmark may have to be set aside. Watch this space.

Friday 24 June
One of the issues thrown up by the referendum debate was the role of 'experts’ in helping people to make decisions. Both sides wheeled out a range of 'experts’, purporting to offer objective information on the economic, political, legal and social implications of voting in or out. Many voters found these contributions confusing rather than enlightening. In the end, they may have relied more on gut instinct than on 'professional’ input in deciding which side to back.

'Expert’ judgement can be problematic in other contexts. In criminal cases involving injury or death, for example, it is not uncommon for prosecuting and defence counsel to offer conflicting medical evidence. How members of the jury respond to this may depend as much on the expertise of the advocates, in questioning the witnesses, as on the scientific accuracy of the testimony. The result may owe more to courtroom skills than to any conception of justice.

I was once asked to serve as an 'expert’ witness in a civil case relating to the education of a child with special educational needs. My knowledge of the specific area was limited so I declined, but I was able to recommend someone else who did have the necessary specialised background. On another occasion, I did agree to provide evidence in a civil court, but the disputing parties reached an out-of-court settlement a week before the case was due to be heard. I was thus deprived of the opportunity for a little verbal jousting with the cream of Scotland’s legal profession.

'Experts’ should certainly be listened to, but they should not be treated with undue deference, simply because of their reputation, and their conclusions should be subject to sharp critical interrogation.

Saturday 25 June
The interactive version of the Radio 4 programme PM uses topics suggested by listeners as the basis of its content. I approve of giving over more air time to members of the public – and less to some of the attention-seeking 'celebrities’ who dominate the media – but I find myself asking why this 15-minute slot is broadcast at 5.45 on a Saturday morning. The timing suggests limited commitment to audience participation.
The programme also invites listeners to send in single sentences reporting what has been happening in their lives over the previous week. A couple of recent examples were:

'Finally I persuaded my 85-year-old dad to get a mobility scooter and it’s given him a new lease of life as he zooms round the village.’

'Another father’s day passes and still my husband hears nothing from the three children he’s estranged from.’

The inclusion of the first item is easy to justify. It’s a good news story and conveys an appealing picture of the old boy whizzing round his neighbourhood, perhaps with cats and dogs running for cover. The second is more problematic. Clearly there is a back story to the situation but, without more information, it’s hard to draw any firm conclusion. These and other comments do provide little vignettes into other people’s lives and to that extent they have some value. But rather like Points of View on television, which offers viewers a chance to comment on programmes, there is a distinct impression of media professionals making a small, rather patronising, gesture towards audience involvement.

Sunday 26 June
A friend has drawn my attention to a new literary magazine called Quotidian (available both online and in print form). As the name suggests, it encourages writing that starts from ordinary, everyday events but presents them in striking, original ways through the creative skills of the writers. People reveal themselves through small actions as much as by their responses to more dramatic events. The great writers have always managed to combine the texture of everyday life with profound insights into the human condition.
The new magazine has been established by students at the University of Strathclyde but features work from across Scotland. It publishes short fiction, creative non-fiction and poetry, and also showcases impressive work by photographers and sketch artists. The first two issues include stories about people-watching on the subway, a tense car journey and schoolboys learning to dance.

New magazines come and go and whether Quotidian turns out to be short-lived or long-running remains to be seen. I wish it well. The future vitality of cultural life in Scotland is likely to depend as much on initiatives of this sort as on the patronage of established agencies such as Creative Scotland.

Monday 27 June
As I write this, the predictable blood-letting among the Labour leadership, following the party’s failure to rally its traditional supporters to back the Remain side in the EU referendum, is proceeding apace. Hilary Benn has been sacked, followed by a series of resignations from the shadow cabinet. When Jeremy Corbyn was elected as leader I predicted that, despite his popular appeal to party members, he would be unlikely to last more than a year. I drew attention to the role of the trade union movement in helping to choose leaders who were destined to fail – Michael Foot, Neil Kinnock and Ed Miliband. A friend recently alerted me to the fact that, in all three cases, their fate was presaged by minor incidents captured on film and endlessly replayed: Michael Foot wearing a 'donkey jacket’ at the Cenotaph on Remembrance Day; Neil Kinnock falling into the sea on Brighton beach; and Ed Miliband’s inelegant consumption of a bacon roll. Politics can be very cruel.

For Labour to have any chance of recovering from its present desperate state, it has to look beyond familiar names and faces. The old guard, associated with a failing political establishment, are utterly discredited (the same is true of the Tory party). When I wrote that Corbyn wouldn’t last, I named someone who could provide the party with a fresh start – Dan Jarvis, MP for Barnsley Central, a northern constituency of the kind that feels it has been ignored by the London elite. He is a former army officer, a graduate of Aberystwyth University (not Oxbridge), whose school education took place at a state comprehensive. If the Tories are foolish enough to choose Boris Johnson, Dan Jarvis is exactly the sort of person who could take him on and expose his crude opportunism and lack of political judgement.