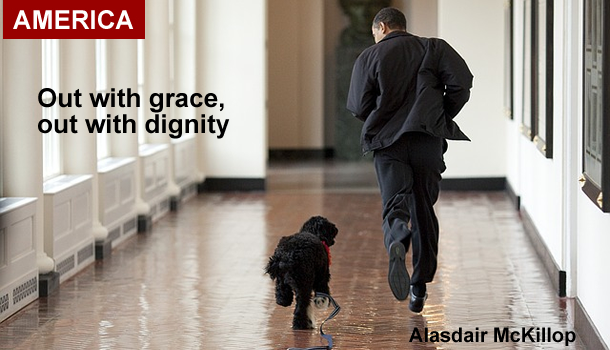 The coming years will be difficult for those of us who keep our love for America close to the centre. Maybe it would be best if we took our feelings into the woods and buried them like a dead dog. An approach with more ballast, and an easier one, would be to accept that no country changes completely overnight. Just as a lifelong friend is not transformed from one day to the next by marrying someone you find disagreeable, so must something of the old linger even as a country undergoes a process that looks very much like a severance from its best parts.

The prospect of Donald Trump’s presidency is more jarring when contrasted with what went before: if he were succeeding Gerald Ford, the situation would still be grim but the fall to rock bottom would be mercifully shorter. Barack Obama’s record in domestic and particularly foreign affairs will be subject to interpretation, but he was a president of uncommon grace and dignity.

He combined a solemnity that acknowledged the historical importance of the office with a common touch that reflected a less deferential attitude in public life. He seemed able to convey a little of the many things that make the United States so enticing despite its manifest flaws. He was apparently able to function in the full knowledge that many people saw him, impossibly, as a corrective to one of the worst of those flaws. And he was a man of learning, of empathy and of reason. Through some mixture of nature and experience, his composure seemed to achieve a perfect state when circumstances were at their most difficult, such as in the aftermath of another terrible mass shooting or when African-American communities and police forces were ranked against each other on the streets of an American town.

In a recent interview with Michiko Kakutani, the chief book critic at the New York Times, Obama disclosed that reading had sustained him during his two terms. He said it allowed him to 'slow down and get perspective' and 'get in somebody else’s shoes'. These are not statements that would emit from Trump’s crowded mouth. We might instead imagine he will be sustained by the presence of reflective surfaces in the Oval Office and by wondering about a name for the bald eagle mascot he will acquire – my money is on Ace.

The New York Times piece observed that no president since Lincoln had been shaped so carefully by the processes of reading and writing. This was a subjective assessment, of course, but Obama fulfilled a certain need for the leader of the free world to be a man of high intellectual calibre, a yearning exacerbated by Aaron Sorkin during the George W Bush years. Whether discussing the African-American experience with Ta-Nehisi Coates or past presidents with Doris Kearns Goodwin or America in general with David Remnick, Obama has proven himself a man of wide learning and considered judgement. He leaves office as one of the few political leaders of recent times who might continue to influence events not out of deference to his previous role but because of the originality of his thought and writing as a private citizen.

What aspects of American culture have shaped Trump, the plastic explosive figure? Has he been influenced by American literature, music or film? Does he follow a sports team? Given his long association with New York City, could he name a starting pitcher for the Yankees, the manager of the Giants or a forward for the Knicks? He likes magazines when he is on the cover, which is just the same as saying he likes himself. He emphatically does not like magazines when they criticise his restaurants.

What is it, exactly, that he likes about America? Adam Gopnik argued Trump’s inability to find a popular band or even a tribute act to perform at his inaugural ceremony was evidence that he was a cultural aberration, a creature of unknown origins in the American creative experience. This was good. This gave the issue heft whereas it had been little more than an opportunity for social media mockery.

Rosemary Goring rightly whipped away this comfort blanket before we could even get it under our chin. Trump, she argued, has been slow cooking in the utterly banal juices of some of America’s cultural output before he knew it himself: he is the president of the talent show and scripted reality television era. The idea that Trump emerged from American culture, not just its racial and economic tensions, is deeply discomforting. Many citizens of other countries feel, rightly or wrongly, that they have a stake in what goes on in the United States precisely because its culture is as much a part of their lives as is that of their own country.

For now, there is no Carpathia close enough to offer the prospect of rescue, just freezing water and the wreckage of something so recently monumental. Come this afternoon, Trump will have his hand – his hand that you wouldn’t want on the shoulder of your child or on your biscuit tin – on the Bible. If there isn’t at least a wisp of smoke the existence of God will be conclusively disproven. Alongside the deep sense of trepidation, some of us will experience not the vindication of the cynical belief that America has finally revealed its true form but a deep sense of disappointment because we know it could have done so much better. Such oppositional sentiments, however, are as futile as standing on a dock and seeding the grey acres of a great battleship with little wads of gum.